Three NFL players now have cereals named after them 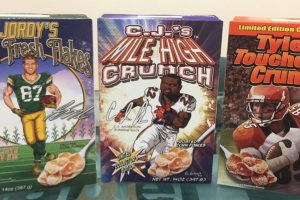 According to Darren Rovell of ESPN, Tyler Eifert, C.J. Anderson and Jordy Nelson have cereal named after them, thanks to PLB Sports.

Nelson recently talked about getting involved in this venture.

“It’s something I don’t think you anticipate when you get older and play sports, to be on a cereal box, but it’s pretty cool to see it,” Nelson said, per Jeff Bollier of the Green Bay Press-Gazette. “It’s cool. It’s an honor. Hopefully, everyone goes out and tries it, has some fun with it. That’s why we did it.”

This is pretty cool. If you want to buy a box, it is 10 dollars for a two pack.  I don’t know if it tastes good but it is a great collector’s item.