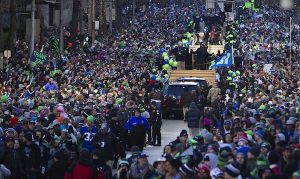 City of Dupont, Washington was scheduled to have a Seahawks rally scheduled for yesterday but that did not happen. The mayor of Dupont Mike Courts is a retired Army Colonel but he is not happy with their movement.

“While I respect the right of NFL players to express themselves, they must also respect the fact that their actions are hurtful to the community. As I said before, we need to find answers without violence or vitriol. So, until we as a community can find ways to talk and work together, the City of DuPont will not take sides by offering official support of the Seahawks, NFL, or individual players,” Courts said in a statement posted on the city’s website.

“I believe the controversy surrounding the potential protest at the Seahawk game makes it inappropriate to commit City resources to an activity that may be misunderstood or prove offensive to a large number of our residents. This does not mean that I or the City do not support the causes being championed, we simply do not support the protest actions being contemplated,” Courts added.