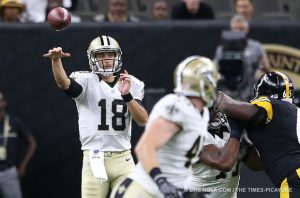 The man the Saints thought would eventually be Drew Brees’ replacement is no longer with the team. According to Pro Football Talk the New Orleans Saints have waived former third-round QB Garrett Grayson on Wednesday.

Grayson, the 75th pick in 2015, was third on the depth chart behind Drew Brees and veteran Luke McCown. It’s unclear whether the Saints will carry a third quarterback on the roster.

Grayson in the preseason completed 39 of 70 for 409 yards with four interceptions and two touchdowns.