After running for 65 yards the Bills are re-signing Jerome Felton; Waive Glenn Gronkowski 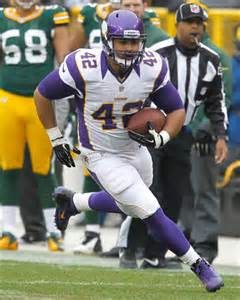 The Buffalo Bills let their starting full back go and boy did it show this weekend. LeSean McCoy ran for 58 yards on 16 carries.  The Bills need help and Glenn Gronkowski is not the answer at fullback.

Fullback Jerome Felton, a surprise cut prior to the season, is heading back to re-sign with the #Bills, source said.

He previously played for the Minnesota Vikings, where he had been a fundamental part of Adrian Peterson’s success, including Peterson’s 2,097 rushing yards season in 2012. He played college football at Furman University, and was drafted by the Detroit Lions in the fifth round of the 2008 NFL Draft. He has also played for the Carolina Panthers and Indianapolis Colts of the NFL.

The #Bills are waiving Glenn Gronkowski today to make room for Jerome Felton, source said. One FB in, one FB out.