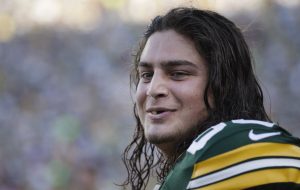 The Green Bay Packers did not want to give Josh Sitton a new deal because it would have cost them quite a bit, but today the team signed their left tackle David Bakhtiari to a new 4 year deal worth 51.67 million dollars according to Tom Silverstein which makes him a top 5 paid offensive lineman when it comes to new money on the contract.

Source said Bakhtiari deal puts him in top five in yearly average based on new money. Right around $12M.