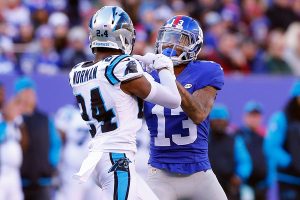 Refs will be watching Norman/Beckahm hard

NFL vice president of officiating Dean Bladino said on NFL Network this week that the crew working the New York Giants-Washington Redskins game has been instructed to keep a close eye on Beckham and Norman.

“Before every game, our crew gets a scouting report, and that includes video clips, different things they can expect from the two teams — formations, tendencies,” Blandino said, as transcribed by Mike Florio of Pro Football Talk. “And any time there’s a history between the two teams, players, that’s part of that report. Typically, divisional matchups, rivalry games, we want to make sure we maintain control. And when there’s a history between two players, obviously we can’t ignore that. And the crew will be aware of it. And just like any other game, we want to take that first opportunity to set the tone and be a presence early. Let the emotion die down, so we can just get down to playing football.”

I am wondering what type of performance we will get. Who do you think gets the upper hand?