High School player was suspended after kneeling for National Anthem; It has been overturned 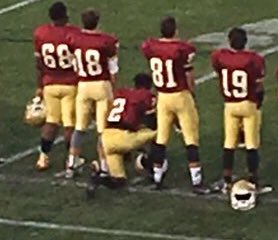 My coaches and principals have decided to suspend me for 1 game.

After Michael Oppong the High School QB and DB was suspended by his team and his coaches for 1 game.  Well the public did not like it and after numerous articles and numerous letters to the school they overturned the suspension.

Thanks to all your love and support my suspension of 1 game has been terminated! pic.twitter.com/a8RB9c200N

I just want to thank all of you guys for the support you all gave me throughout this whole situation and by God’s grace Justice was served!