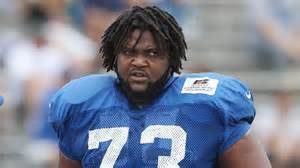 The New York Giants have their kicker back from suspension and now they are releasing Randy Bullock. The team in a corresponding move is signing defensive tackle Montori Hughes.

Hughes played college football for the University of Tennessee at Martin, and was selected in the fifth round of the 2013 NFL Draft by the Indianapolis Colts.

Sounds like it’s Montori Hughes in, Randy Bullock out. #Giants haven’t announced moves, but they were looking to add a DT, per source.