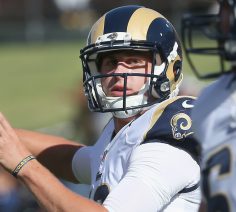 Jared Goff the first pick in the NFL Draft will not even be on a week one roster.  According to his head coach Jeff Fisher, the Rams will not activated first overall pick Jared Goff week 1.

“Jared’s had a great camp, so has Sean. Case is clearly our starter. I think Week 1 just to settle things down … it’s probably going to be, like I mentioned last week, it’s probably going to be three and inactive,” Fisher said to Steve Wyche of NFL Media. “That’s just how it goes. And then next week we’ll flip them. I just want him to feel and sense and absorb the pressures of Week 1. He’s going to be a great player. As we’ve said from Day One, we’re not rushing him. We don’t have to rush it. I’m really happy with where he is right now. It’s unfair to compare him to anybody else. I know Philly has got their situation, it’s a little different and trading Sam so Carson is going to start, but you know Jared is in a good place right now. He’s done some really good things, so I’m really pleased with his progress.”

This may be the first time in NFL history that a first overall selection was not activated week 1 of the regular season. I honestly cannot think of a time it has happened.