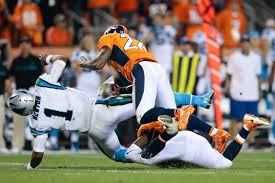 Broncos safety was fined 18k for his hit on Cam Newton

Cam Newton was leveled by Darian Stewart the Broncos safety and today the safety paid for it. According to the Adam Caplan the NFL is still reviewing hits on Newton from Bradley Roby, Brandon Marshall and Von Miller. Could more fines be coming?

The NFL docked the Broncos free safety $18,231 for striking Newton, according to ESPN’s Adam Caplan.

#Broncos S Darian Stewart has been fined $18,231 for his hit in last week’s game on Cam Newton, source said.