Colin Kaepernick is now the NFL’s most hated player 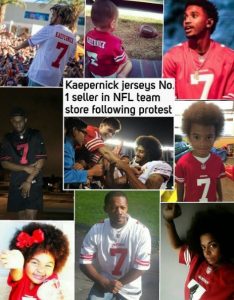 According to a recent poll of Americans by E-Poll Marketing Research, which asked 1,100 people who is the most hated NFL player, Colin Kaepernick was crowned the winner.

The poll, taken last week, revealed that Kaepernick was “disliked a lot” by 29 percent of those polled, more than any of the more than 350 players asked about in the survey. Kaepernick finished ahead, in the dislike category, of Tampa Bay Buccaneers quarterback Jameis Winston (22 percent), Miami Dolphins defensive end Ndamukong Suh (21 percent), New England Patriots quarterback Tom Brady (13 percent) and Pittsburgh Steelers quarterback Ben Roethlisberger (10 percent).

This man is the most hated football player right now for what?  Because he is speaking up about injustice?  This is interesting to me.