Cliff Avril sent text to Tony Romo to apologize for hit; Romo responded with a promise 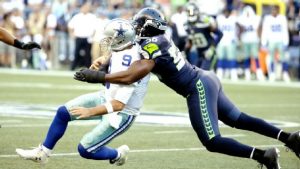 Cliff Avril of the Seattle Seahawks felt bad that Tony Romo was injured in their preseason game against one another, so he sent Tony a text message to make sure the former Eastern Illinois QB understood he was not trying to hurt him.

Romo responded to the text, and told the pass rusher that they will see one another in the playoffs.

“I hit him up to see how he was doing and to let him know it wasn’t intentional,” Avril told the newspaper. “He hit me back saying it was football and it was a freak accident. He started joking and saying ‘You take care of the NFC West and we will see you in the playoffs.'”

Gotta love Tony Romo, I like the response too. Only an underdog would still have a sense of humor after all his injuries.