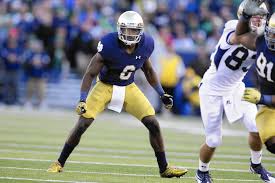 Chiefs have cut their 3rd round pick

Rand Getlin reports that the Chiefs have placed DB KeiVarae Russell on waivers Wednesday. This is a crazy move because the team spent a third round pick on him earlier this year in the draft.

Russell was drafted by the Kansas City Chiefs in the third round (74th overall) of the 2016 NFL Draft. He played college football at the University of Notre Dame.

Russell broke down in tears when answering questions from Kansas City area reporters shortly after he was drafted saying “Bear with me,” Russell said. “My mom struggled, never had much. It’s just a way out, a way out for my family. It’s a way to make my family smile, too. I was the first one to graduate high school, first one to go to college. I’ll be the first one to get my degree when I get it. This is something big. That’s why it’s so special. [Being drafted] is changing my circumstances.”

This sucks for him, but at the end of the day he will likely be claimed by another team.