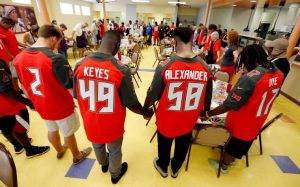 The Tampa Buccaneers have re-signed LB Josh Keyes on Friday and placed rookie LB Devante Bond on injured reserve, according to Greg Auman. Keyes was signed by the Buccaneers out of college as an undrafted free agent. He played college football at Boston College.

In a corresponding move the team placed DeVante Bond on the injured reserve. Bond was drafted by the Buccaneers in the sixth round, 183rd overall, in the 2016 NFL Draft.