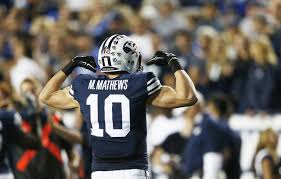 BYU wide out Mitch Mathews is a big, long armed wide out with good route running ability. Could be a great red zone threat for an NFL team

Today the Cleveland Browns are hosting former BYU wide receiver Mitch Mathews. Mathews is a big target at 6’5 and 222 pounds and caught 20 touchdowns last season with the Cougars. Most of his touchdowns came in the redzone, because of his long arms and ability to catch the ball at it’s high point.

Mathews, a signed with the Chiefs as an undrafted free agent after not being selected in this year’s NFL draft.

In three preseason games, Mathews did not record any receptions or targets. He played a total of 14 offensive snaps and nine on special teams, but didn’t log an offensive snap in the Chiefs’ second preseason game against Los Angeles and just three in the team’s most recent game, a victory over Chicago.

The Browns could use another wide out with the recent news from Josh Gordon.