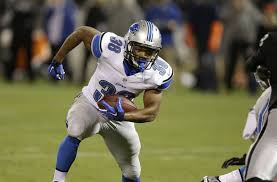 Today the Detroit Lions began roster cuts, and running back George Winn who has been very solid for the Lions on both Special Teams and as a running back was released.

He played college football at Cincinnati. He originally signed with the Houston Texans as an undrafted free agent in 2013.

Winn has bounced around the league, but he really found a home in Detroit.  It will be interesting to see if the Lions try to bring him back to their practice squad.