Brandon Marshall says he is willing to mentor Austin Seferian-Jenkins 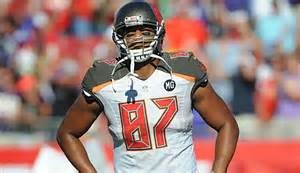 Austin Seferian-Jenkins has a mentor in New York

Brandon Marshall has a new teammate in New York and he wants to help him.  According to an interview with Rich Cimini of ESPN, Brandon Marshall plans to assist with the mentoring of Austin Seferian-Jenkins.

“We’ve been talking for a while. He’s a great talent,” Marshall said Tuesday, via ESPN’s Rich Cimini. “When I heard [Monday] we claimed him, I was like, ‘This is God-sent.’ If he needs me, I’m there. I’ve already connected him with the right people in the city if he needs them.

“Guys need second chances,” Marshall added. “When you make a mistake, it doesn’t mean you are a bad person. You need people to believe in you, and sometimes a fresh start is a good start.”

Marshall even admitted he had problems in the past.

“I would say this: We don’t know if those are his issues,” Marshall said. “I had a DUI before. And you live and you learn. There are a lot of people that make terrible decisions, but it doesn’t make them terrible people.”