Utah Utes WR did what to a police car and a police station? 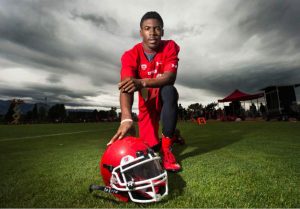 Corey Butler-Byrd a starting Senior wide receiver for the Utah Utes was arrested and kicked off the team after this interesting arrest.

After arresting him, the officers saw that one of the building’s windows was broken. Butler-Byrd told them he had thrown a piece of wood at the window, which shattered it.

One of the officers also noticed that the rear window of his patrol car had been shattered, and the roof had a “large dent” in it. Video footage showed a man jumping on the roof of the car — something police said Butler-Byrd also admitted to.The officers released Butler-Byrd afterward. The damage is estimated to exceed $500, according to the Salt Lake Tribune.

It sounds like Butler-Byrd was using some sort of drug, because this is just weird…