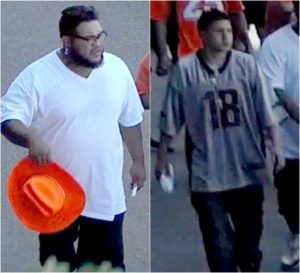 These two knuckleheads stole a players helmet when he was trying to sign autographs for the fans.

The Denver Broncos are not happy that one of their players helmets was stolen from him after practice.  The unnamed player put his helmet down to sign some autographs when this schmuck with the Orange Hat stole the helmet valued at 400 dollars.

He walked and passed it to the other man in the photo. The two have not been identified.

“The theft is so brazen,” said Julie Brooks, spokeswoman for the Arapahoe County Sheriff’s Office. “It was in front of hundreds of people, right next to the (Broncos) player who put the helmet down. People were interacting and he took advantage of the distraction. It wasn’t on a table out of the way, with no one looking.”

The theft happened about 3:15 p.m. July 31 during an autograph-signing session after Broncos practice.