As you all know were the site to discover Moritz Bohringer, Tyler Davis, Anthony Dable, Patrick Donahue, Harry Innis and others from overseas. All of the players listed above and many more have talents to play here in the United States, but I may have found the next two players worthy of getting signed by an NFL team.

I want to introduce you to some pretty talented players from across the pond. 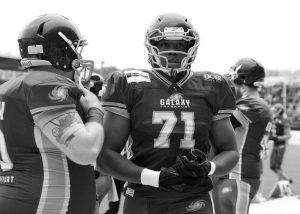 Meet Mamoudou Doumbouya aka Doums an Offensive Lineman from France.  He was actually on the French National team with Anthony Dable who was signed by the New York Giants earlier this off-season.

This mammoth does not play around with his defenders. He dominates them from the start of the whistle until the end. This kid has talents and I think he will be given a shot sooner rather than later.

Now let’s meet the other amazing player from overseas. This kid will shock you trust me.  He is a huge target with soft hands and guess what he just turned 23…. 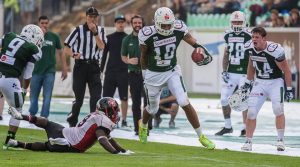 The 6’7, 233 pound wide out is likely a tight end in the NFL, but he has soft hands and is only 23 years old. Ari can make all the plays and is very similar to Harry Innis.  The only difference is his age, he is a few years younger than Innis.

This kid could be hearing from NFL teams very soon. He is super talented and he can make all the plays downfield as well as short yardage plays.

We know NFL teams read our information, and if you are interested in learning more about either player please email us at nfldraftdiamonds@gmail.com.

We have contact information for both players and can help you get in touch with them.