Teams are calling for Josh Gordon, or are they? 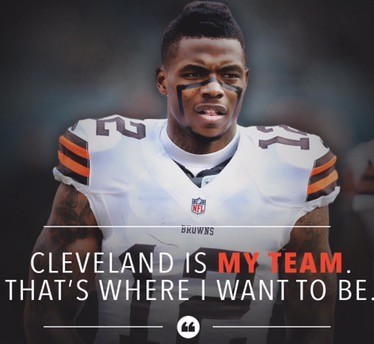 Several team have been picking up their phones to call Cleveland, and it isn’t to speak to Lebron. Teams have been calling the Browns in regards to troubled wide receiver Josh Gordon. While most teams would be looking to trade big for someone with Gordon’s potential and production, and also get rid of his baggage, the Browns are not interested in dealing Gordon, and Gordon doesn’t want to leave.

Gordon said, “Mr. Haslam, the organization, Coach Jackson, I think the world of those guys, this city, this organization. They’re showing me the love and respect back to me by allowing me to stay here up to this point. I expect to move forward with that. I’m excited about it. This is where I want to be and I’m happy to be with Cleveland.”

While Gordon has spent a good chunk of his NFL career on the suspended list, he is still a considerable weapon that the Browns are looking to unleash on the league. Gordon believes that he is in the right environment, and on the right team to turn things around and return to his 2013 form when he led the league in receiving yards.

With troubled friend Johnny Football out of Cleveland, this may be the year Gordon hunkers down, and is able to control his partying behavior, and refocus to make Cleveland a serious contender in the AFC North. The thing is who put out the rumor?

Tony Grossi of ESPN Cleveland mentions that there’s “something fishy about the Josh Gordon trade rumors” that surfaced on Tuesday.

“There is a cynical point of view out there that the Browns floated the story of interest in Gordon to promote more activity,” Grossi writes. “That they are looking to cut their losses and get something for him before he self-destructs again.”