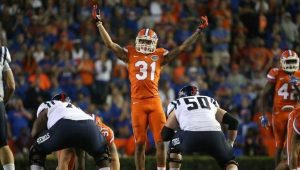 Jalen Tabor has been suspended the first game of the year

Florida cornerback Jalen Tabor is one of the best NFL Draft prospect in 2017 and now the shutdown corner will be suspended to start the season. Both Tabor and C’yontai Lewis have been suspended for the teams home opener.

Tabor, a junior and preseason All-SEC selection, and Lewis are suspended from practice and team activities as well as the Gators’  Sept. 3 season opener against UMass. The two were involved in an altercation at practice Tuesday, requiring multiple players to separate them, according to ESPN. McElwain did not disclose specifics about the cause of the suspensions.

“Both C’yontai and Jalen will not be involved with the team or practice due to behavior that is not acceptable,” McElwain stated in a release from the school. “By no means are these bad guys and yet consequences have been handed down. We will not look the other way when it comes to breaking of team policies. I want to echo what I said earlier, these are both fine young men who will learn and be stronger from their actions. They will also be suspended for the first game. There are life lessons in everything we do. We will be better because of it and no one person is bigger than the Florida Gators.”