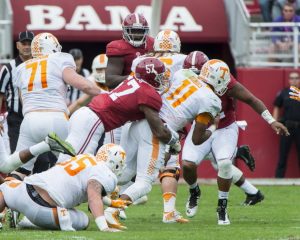 Former Alabama defensive lineman D.J. Pettway was waived by the New Orleans Saints Saturday. The Saints made the move to make room for fullback John Kuhn, who is a former All-Pro player with the Green Bay Packers.

He played in all 15 games for the Crimson Tide’s 2015 national championship season, recording 18 total tackles, two sacks and five tackles for loss.

Pettway joined the Saints as an undrafted rookie in May, and will now be subject to waivers.