RG3 wants to file a divorce; Tattoos his new girls name on his arm 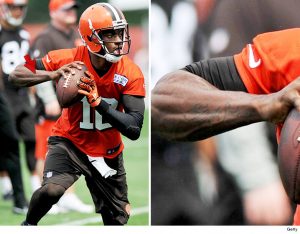 Robert Griffin III has decided to divorce his new wife in exchange for a Florida State track star.  RG3 went so far to even get her name tatted on his arm.

Robert Griffin III and his wife have been separated for months — after she found out he was dating a new woman … and sources connected to the situation tell us she’s absolutely devastated.

We’re told the social media relationship turned real … and when Rebecca found out about her in April, she was pissed.

The two separated shortly after. They haven’t lived together in months.