Report: Chiefs QB Tyler Bray has a chip fracture in his spine 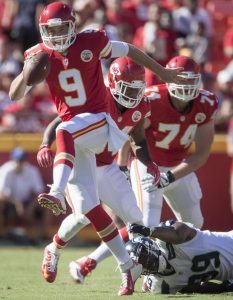 The Chiefs have five quarterbacks on their roster that are better than most teams back-up, but they could be down one for a couple weeks. According to the Kansas City Star, Tyler Bray suffered a small chip fracture in his cervical spine, the team announced after Monday’s practice.

“It sounds much worse than it is,” Chiefs trainer Rick Burkholder said. “We’re treating it as a sprain, because it’s just like that.”

Burkholder said Bray saw two orthopedic surgeons and had X-rays and an MRI on Sunday.

“Once his symptoms go away, and those symptoms are a stiff neck, and as a thrower he has to turn his head and get his hands above his head, we think he’s going to be fine,” Burkholder said.

“We’ll monitor him day to day and see how he does. There’s no real timetable when he’ll return, but we think he’ll be fine to return.”