Ravens third round pick Bronson Kaufusi broke his ankle; Will miss all of 2016 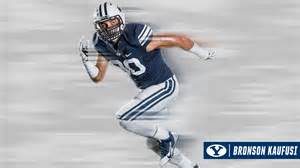 Today the Baltimore Ravens received horrible news, as they will be without draft pick Bronson Kaufusi for the entire season. Ravens HC John Harbaugh told reporters after Thursday’s practice that third-round DE Bronson Kaufusi will likely miss the entire 2016 season after he suffered a broken ankle during practice.

Baltimore will likely place Kaufusi on season-ending injured reserve in the coming days, which is a huge blow for them.

Kaufusi was drafted 70th overall in the 3rd round of the 2016 NFL draft by the Baltimore Ravens. Kaufusi attended Timpview High School in Provo, Utah. He had 70 tackles and 9.5 sacks as junior and 19 tackles and two sacks his senior year before suffering an injury. Kaufusi was rated by Rivals.com as a four-star recruit and was ranked committed to the Brigham Young University (BYU) to play college football.