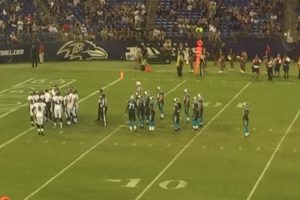 Michael Phelps is an amazing athlete and the Baltimore native received some pretty amazing support from his city.  Last night during the Ravens and Panthers game, everything came to a halt when the Phelps race began.

Both teams stopped and watched the race and when Phelps won the crowd went bananas.  That is a pretty cool moment is sports.

Players from both teams watching on the big board as the Phelps race is shown. Phelps is a Baltimore guy