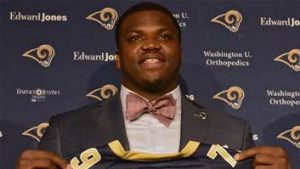 Greg Robinson was drafted early by the Rams to come in and be the guy for many years.  Robinson however has struggled to live up to that hype.  The former 2nd overall pick admitted the team would like him to lose some weight this year.

“I’m dealing with a little weight problem,” Robinson said, via ESPN.com. “But it’s camp. … Just eat healthier, try to watch what I eat and don’t snack too much. That’s the main thing. And just be aware of the possibilities of gaining weight. It’s so easy because there’s so much food right now.”

Last year Robinson was the most penalized offensive lineman in the NFL.  Hopefully he can work on his technique too because his weight was not his only issue.