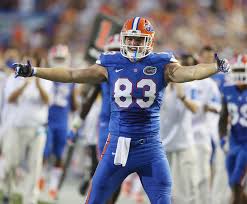 After transferring into Florida from Virginia before the 2014 season, McGee broke his tibia and fibula in his left leg in the 2014 season opener. He didn’t play again until the 2015 season, when he finished with 41 catches for 381 yards and four touchdowns as a sixth-year senior. With those numbers, McGee became the first Gators tight end to record more than 20 catches in a single season since Jordan Reed caught 45 passes in 2012. Between his time at Virginia and Florida, the sure-handed McGee finished his college career with 112 catches for 1,150 yards and 11 touchdowns.