Raiders DL Mario Edwards was carted off for hip injury; Not expected to be serious 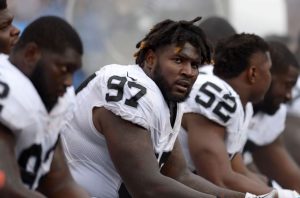 Defensive lineman Mario Edwards Jr., a second-round pick in 2015, left Friday night’s game in Arizona with a leg injury. Edwards was carted to the locker room.

Edwards was out last season with a neck injury, so the Raiders fans were hoping this was not a serious injury.

I am told Mario Edwards’ injury is not serious