Sunday I attended the Philadelphia Eagles open practice at Lincoln Financial Field. There is only so much information one can take and apply from only one practice, but it can give us a glimpse into the future of the team. The biggest takeaway I got from yesterday was of the overall practice compared to last year’s Chip Kelly run practice. This year’s team seemed to practice together as a team, whereas Chip’s team last year spent most of the practice in individual group drills, and then sprinting to the other side of field to do more group drills. Yesterday they did some group drills, but most of the practice was either the offense and defense installing plays, or it was 7 on 7 or 11 on 11 scrimmaging. I will be watching this season to see if maybe this result in a closer team atmosphere. 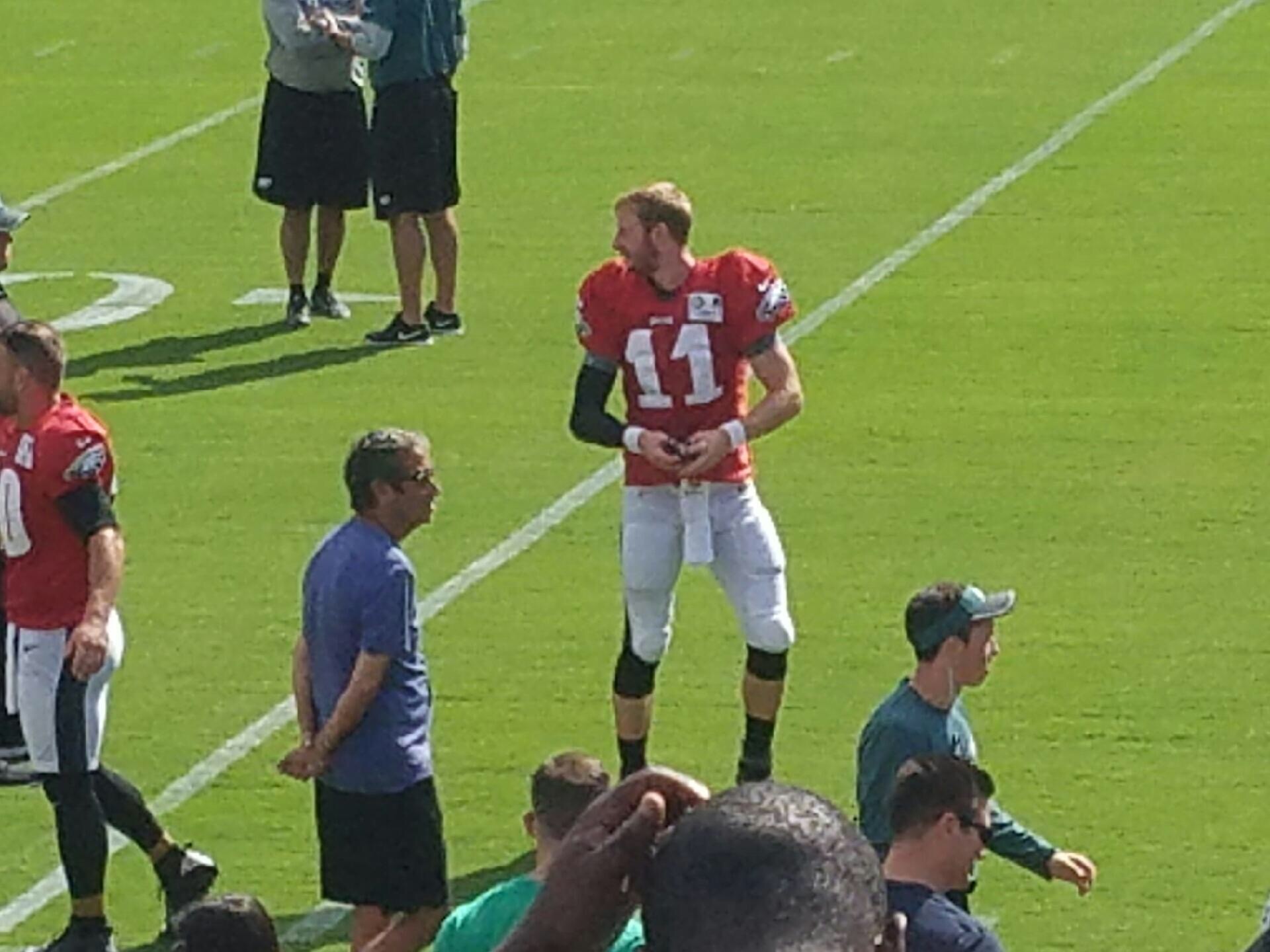 My 2nd takeaway was of Sam Bradford. For all the talk of his finally being healthy and being able to spend this off-season working out instead of rehabbing I thought he looked awful. He was easily outplayed by both Chase Daniel and rookie Carson Wentz. Bradford played scared to me, he often looked for the swing pass or check down that would result in a 2 yard gain. When he would throw the ball somewhat down the field his passes were inaccurate and shaky. I know it was only one practice, but I kind of have a belief that once a player has been in the league for about 5 years, he is what he is, they rarely have a super jump in the last few years, and what Bradford has been throughout his career is mediocre. As far as Bradford still learning this playbook, I would add that this offense is very similar to the one he ran in St Louis his rookie year, when he won rookie of the year. 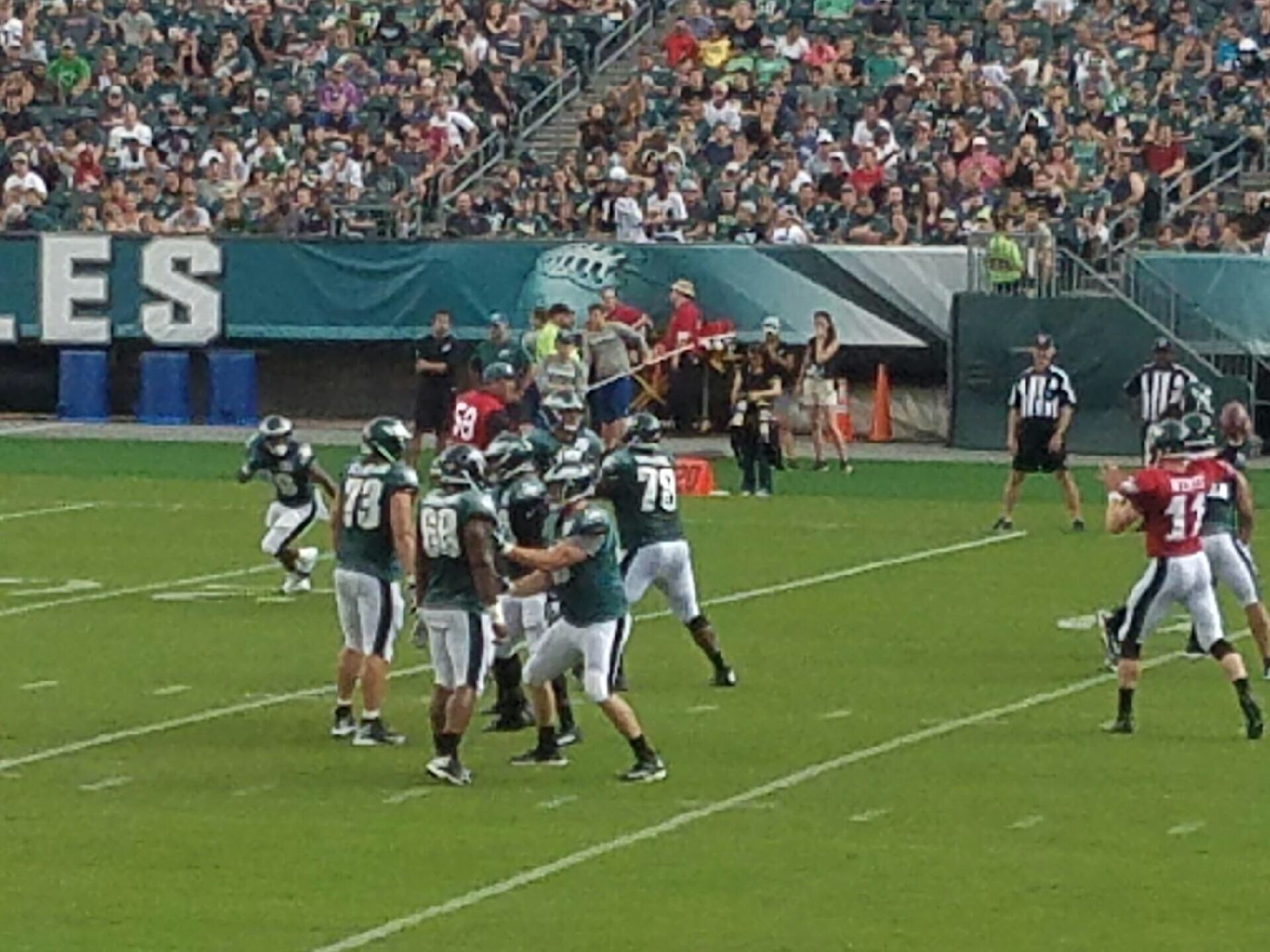 Wentz looked shaky to start with. During warm-ups his passes were usually behind his receivers, but once the scrimmage began he seemed to liven up. He definitely looks the part of a franchise QB. He ran some nice Play action pass plays, he completed some mid level throws to his tight ends, and on one play that got the crowd excited he rolled out of the pocket and broke contain for what would have been a big gain. He is definitely the best athlete the birds have at QB. 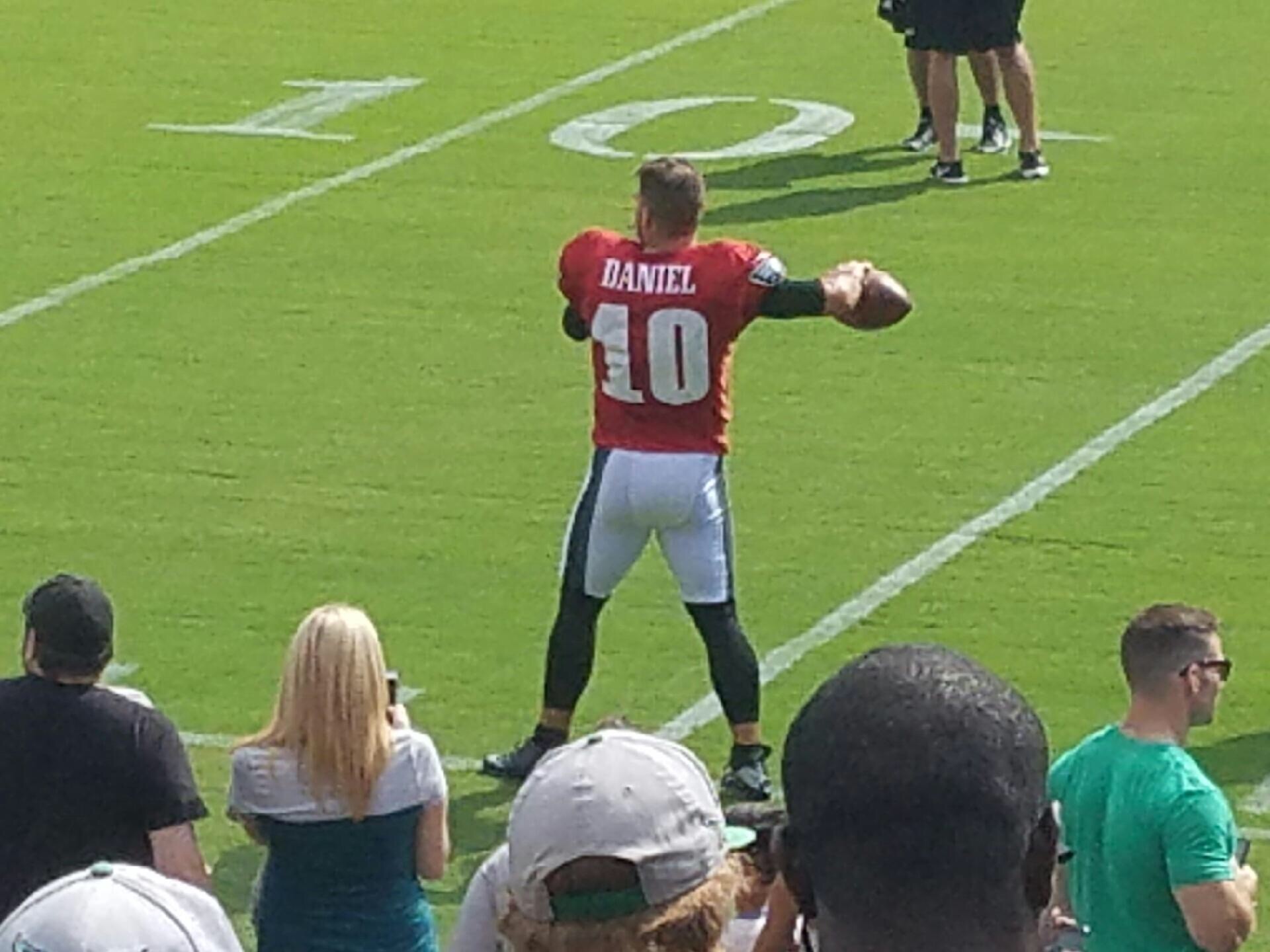 Chase Daniel looked the part of the steady pro. When he was in the passes were complete, nothing fancy, nothing flashy, but it’s obvious he’s comfortable with the playbook. Should Bradford struggle all preseason I could see head coach Doug Pederson going with Chase Daniel. 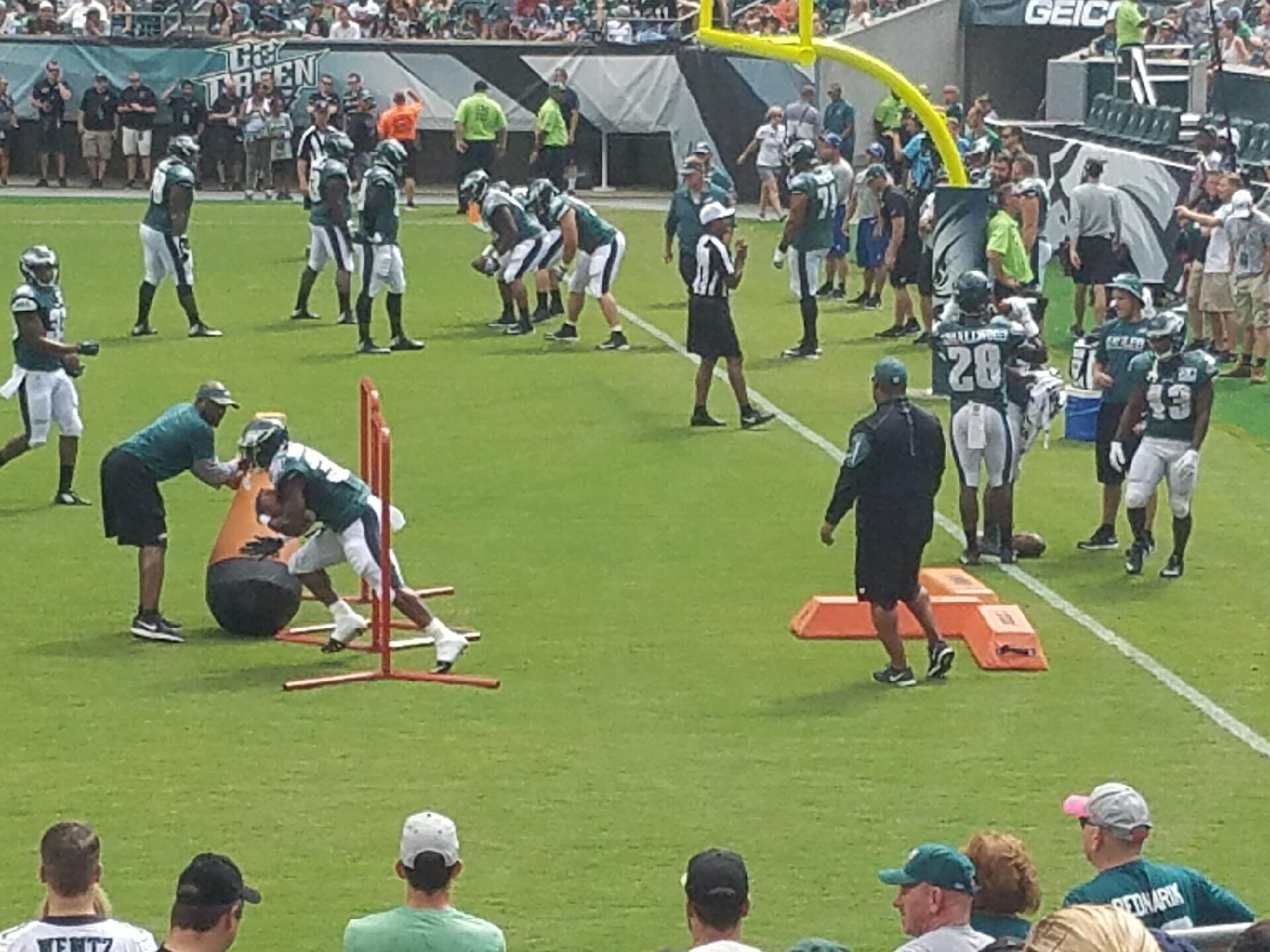 The running backs group is one that the national media is saying is a weakness of the team, but I don’t necessarily agree with that. We know what Ryan Mathews is when he’s healthy, problem is he rarely does stay healthy. That brings me to the others. Kenyon Barner is a player who has the speed, vision, and is a decent blocker. If he could limit his fumbling, he would become a viable option at RB. Wendell Smallwood is a player who I believe will step into the role before too long into the season. A back with decent speed, vision, and the power to run it between the tackles. That still leaves Darren Sproles, whom just signed a 1 year extension. Sproles is the veteran leader and playmaker, both on offense and on special teams. 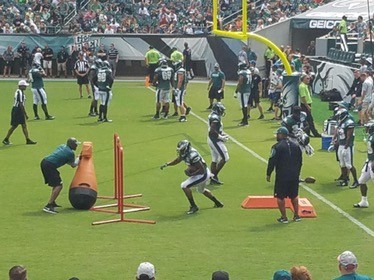 The wide receiver group is however one of the concerning weak spots on this roster right now. Jordan Mathews made a few nice catches, and we likely know what to expect from him this year. Agholor flashed a few plays, he looks smooth and explosive, which makes me think he was injured last year and never fully recovered from it. If he can become what we tthought he was when we drafted him, then this WR core gets a lot better instantly. Rueban Randall and Chris Givens will likely round out the roster. I wouldn’t be surprised if The Eagles watch the waiver wire when training camp cuts start to happen. 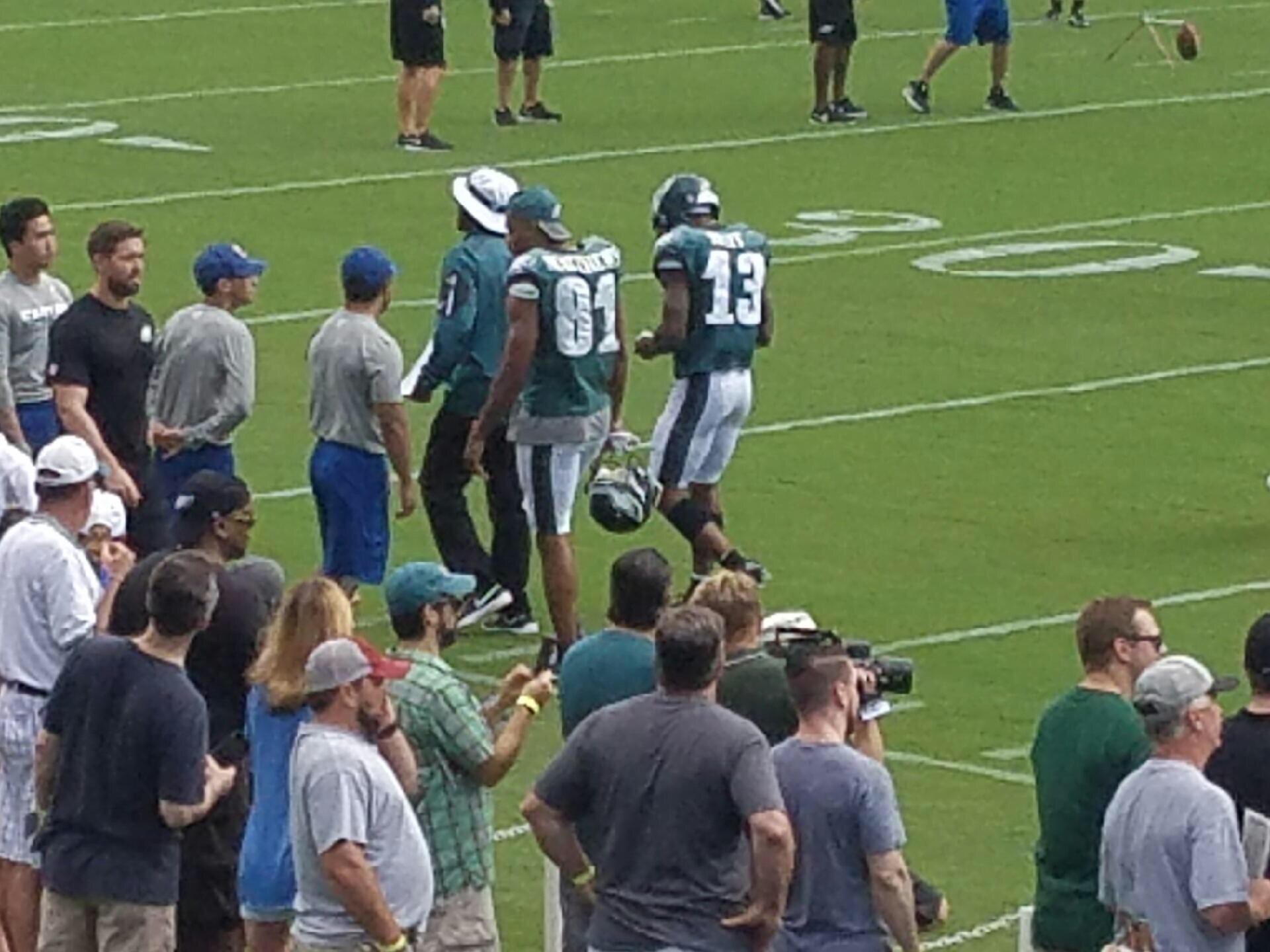 The defense looked fast and aggressive, which is just how defensive coordinator Jim Schwartz likes it. The Eagles front 4 will be one of the best in the league with players like Fletcher Cox and Bennie Logan. The linebackers get last year’s rookie sensation Hicks back from injury. He was a difference maker on the field last year, and will be again this season. Michael Kendricks and Nigel Brabham will be solid, but they lack depth behind these players. Again, I would expect to see some players added here when the cut downs begin. 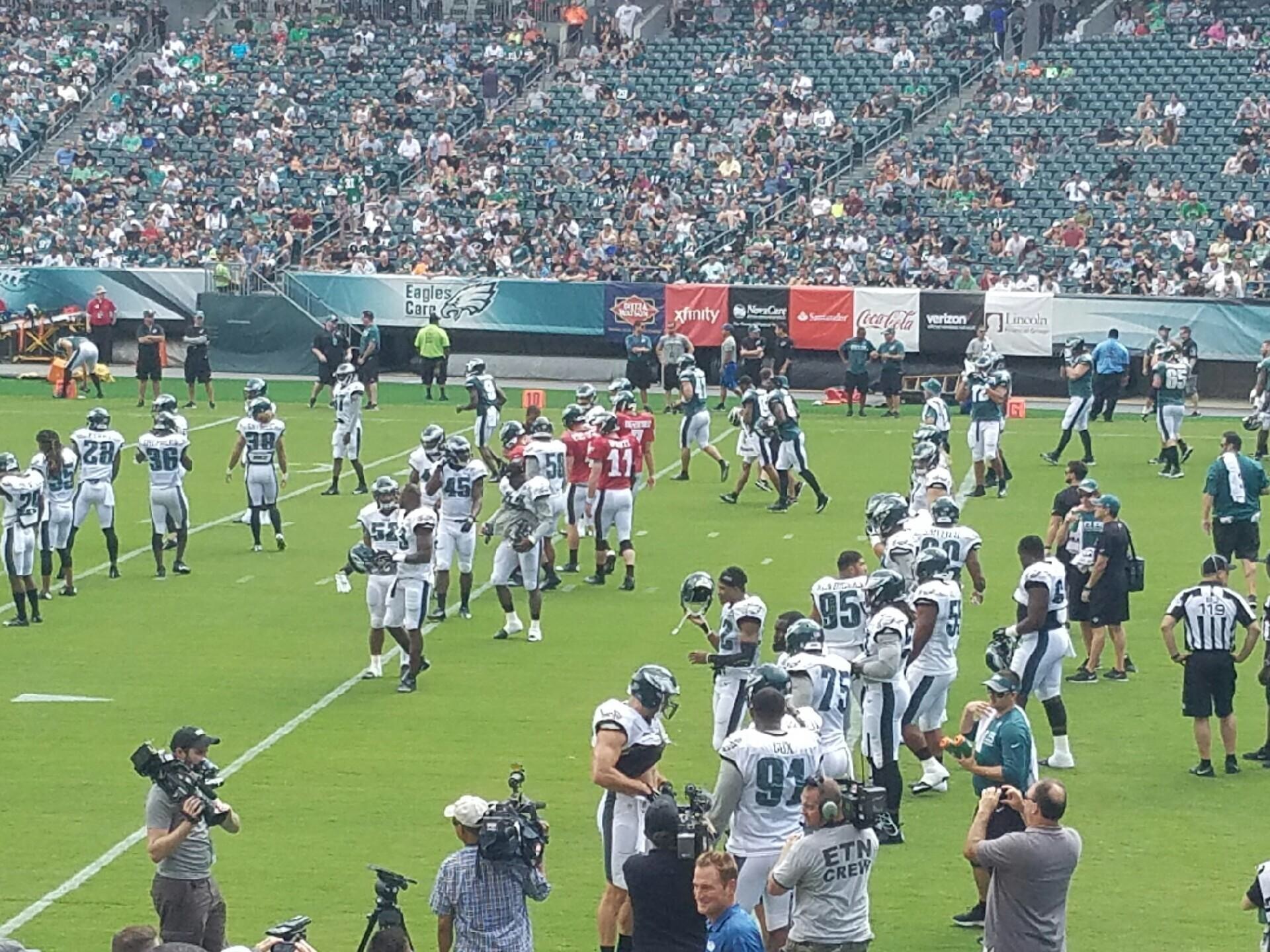 The corner spot is another question mark on this team. Leodis McKelvin looks to be the #1 cb, and you could see him playing like it yesterday, he may have a leg up on his competion having played under Jim Schwartz before. Ron Woods, who also played under Schwartz before seems to be winning the #2 spot, but Nolan Carroll is competing there as well. Eric Rowe and Jacorey Shepard will battle for the reserve roles. 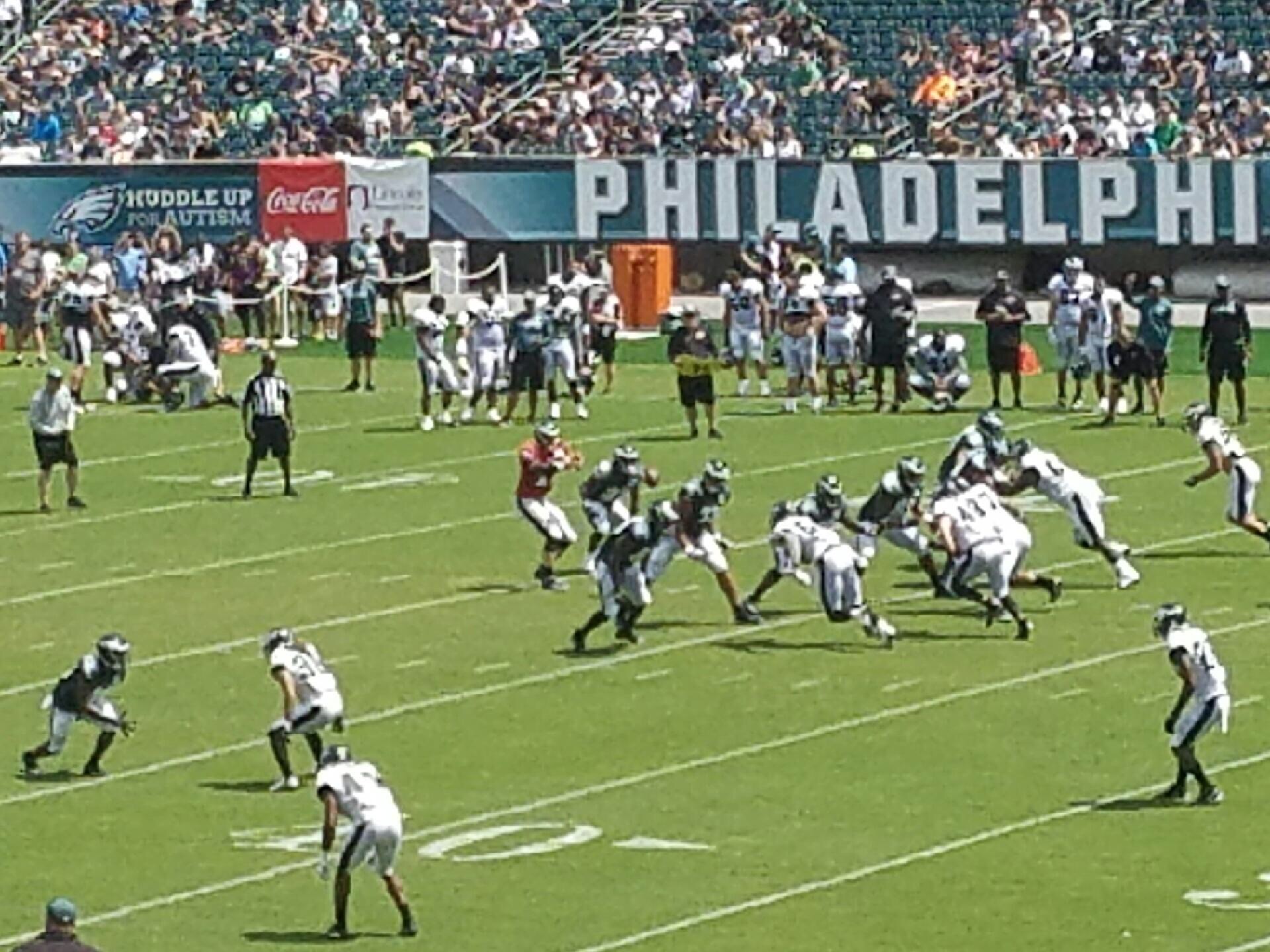 The safety spot may be better than it has been for years. Malcolm Jenkins has been a very productive player, and a defensive leader for this team. He now pairs with Rodney McCloud who you will see fly around on the field. They should be able to make plays early and often. 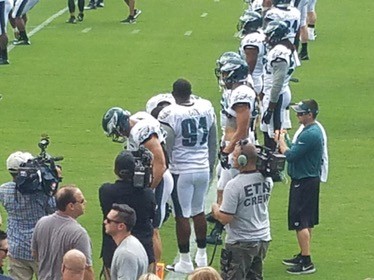 • Overall I don’t expect a great season from the Eagles, but I do expect them to be competitive. They didn’t lose any players of any significance, and the offensive line is better. The defense is back in a 4-3, which suits the roster better, and the offense won’t be playing at warp speed leaving the defense on the field all game long, which should automatically make the defense a little better. The safeties are better. If the wideouts can step up, and if the CB position isn’t a liability, I don’t see how this team isn’t at least a little better than last years.

This piece was written by Lijah Spencer who was live at Eagles training camp. Make sure you follow him on Twitter.

P.S. – Sam Bradford looked better once the pads came off