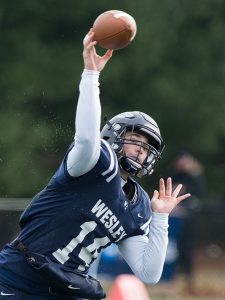 While many were likely hoping to see Aaron Rodgers against Andrew Luck tonight at the Hall of Fame game, that will likely not happen. A matter of fact, a Division 3 quarterback will start tonight for the Packers.  Joe Callahan played at division 3 Wesley College and tonight he will get his first NFL snaps. He said he is going to be nervous but he will be ready.

“First NFL snap, there’s definitely going to be some nerves but then there’s going to be a lot of excitement, too,” Callahan said. “I’m going to try and make sure I’m level-headed and calm so I’m not firing the ball all over the place. That’s one of the things: Don’t let my emotions get the best of me.”

Just to tell you how impressive that is I want to take you back to last year.  Did you know that only 10 players in the NFL were from Division 3.  The Packers like D3 quarterbacks.

Former UW-Whitewater quarterback Matt Blanchard was in the Green Bay Packers camp this past summer and got a decent amount of time in the preseason, but was squeezed out because the Packers are pretty set at the position. He was 11-for-16 passing for 107 yards.