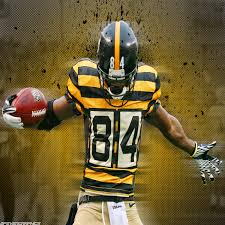 Referee Terry Brown was pretty upset after Antonio Brown snapped on his for a play that occurred in the  end zone.  Brown wanted the official to throw a flag and when it did not happen, the ref says Brown went nuts calling him names and really disrespecting him.

According to the Pittsburgh Tribune-Review, Brown was close to being booted from the Steelers’ joint practice with the Lions. Brown reportedly got into a heated argument with an official following an incomplete pass in the end zone – a play which Brown thought warranted a flag.

“We’re here to enforce the rules,” official Terry Brown said. “This is their practice. He will do it here and get away with it. But if he thinks he can do that and get away with it in a game, he’s got another thing coming. I’m still going to report it to the league.”

It sounds like Antonio Brown could be apologizing for his actions.  He shouldn’t have called out the ref the way he did.  At one point the ref says he had to tell Darrius Heyward-Bey to get the former Central Michigan pass catcher away from him.