The NFL has released a statement regarding kicker Josh Brown of the Giants. It sounds like Brown’s wife did not want to comply with their investigation. 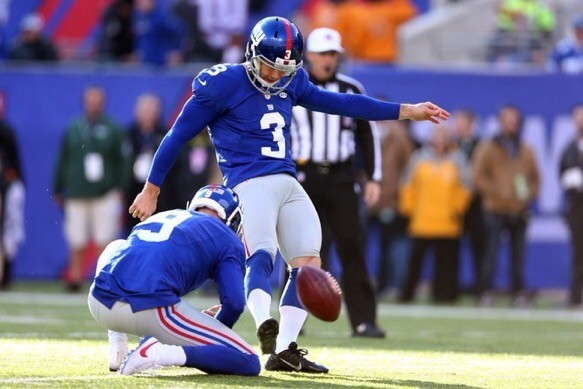 In May 2015, the NFL was informed by the New York Giants of Josh Brown’s arrest for an incident in his home involving his then wife. We began an investigation into the incident and circumstances surrounding it.

In the course of the League’s investigation, our investigators became aware that his wife had filed a statement with the county court alleging previous altercations between the spouses. However, despite multiple attempts to speak with her about this incident and her previous statements, she declined to speak with us.We understand that there are many reasons that might have affected her decision not to speak with us, but we were limited in our ability to investigate these allegations.

Over the course of the 10-month investigation, we also made numerous requests—as late as this spring—to local law enforcement officers for information on the case and previous allegations. They declined those requests for information.

As a result of these factors, our investigators had insufficient information to corroborate prior allegations. In addition, no criminal charges were brought forward regarding the incident in question or prior allegations. The NFL therefore made a decision based on the evidentiary findings around this one incident as provided to us by the District Attorney.

The NFL made a finding that Mr. Brown had violated the Personal Conduct Policy. We did so based on the evidence of this one incident as presented in the police report, Mr. Brown and his wife’s statements to police that evening, and his statements in interviews with the NFL.

The NFL Personal Conduct policy allows for discipline to be imposed even when criminal charges are not presented. It further allows for us to consider both aggravating and mitigating factors regarding discipline for domestic violence.

After reviewing the evidence in this one incident, we imposed a one-game suspension for violation of the personal conduct policy.

Mr. Brown and the NFLPA appealed this discipline, but the decision was upheld by a hearing officer.