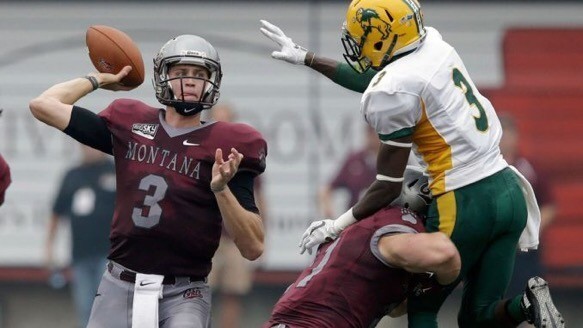 3) Can throw into tight windows

4) Can move around the pocket

5) Can make plays with his feet if necessary

1) Doesn’t step into every throw

2) Not very poise with pressure in his face

4) Can rely too much on him arm

Brady Gustafson made himself known throughout the country in his first season as a starter when he led the Montana Grizzlies offense on a last minute drive to upset Carson Wentz, and the eventual FCS national champion North Dakota State Bison to start the 2015 season. At 6’7” 235lbs., he’s comparable to Houston Texans QB Brock Osweiler. Gustafson’s size allows him to see over the offensive line with ease. He has great arm strength make most throws, and he can throw passes into tight windows with little to no fear. He can also move in the pocket, and make plays with his feet to extend a play.

Despite his footwork, Gustafson doesn’t step into every throw. When facing pressure, he isn’t the most poise. When looking downfield, Gustafson tends to focus & lock onto his 1st or one read. Despite his arm strength, he may rely too much on his arm to make plays. With that, Gustafson isn’t accurate on a lot of his passes, which causes him to miss his receivers on medium to deep passes.

Going into the 2016 season, Gustafson looks like a raw QB with talent. He must show that he can stay durable throughout a whole season. He only played in 7 games in 2015 due to a broken leg. Gustafson also has to show that he can make multiple reads, step into his throws, and throw with accuracy while facing pressure in the pocket. Right now, I have him as a mid to late round grade.