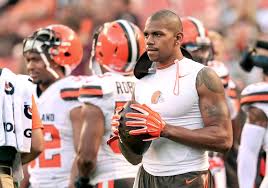 Yep, Terrelle Pryor the former Ohio State quarterback is playing wide receiver for the Browns.  Last night on the first play of the game, Robert Griffin III, connected on a 49 yard pass play to Pryor.  Pryor looked amazing hauling in another 8 yard pass before the night was over.

After the game the media asked Hue Jackson about Pryor, and he said he likes what he sees.

“I thought it was outstanding. I think Terrelle is growing each and every day,” Jackson said.

He must not be kidding because in their first released depth chart, Pryor was the third receiver on the list.