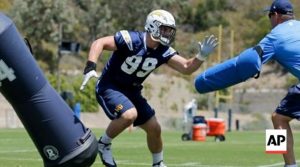 Joey Bosa is becoming a hated man in San Diego

At this point in Joey Bosa’s holdout, there is not really too much good.  The Chargers are fed up with Joey Bosa and pulled their contract.  The Chargers players are taking shots at Bosa, and now, one of the best Chargers to ever suit up, is telling Joey Bosa to end his hold out. Chargers former RB LaDainian Tomlinson took a jab at the Ohio State rookie.

“Any football player who wants to be great, it doesn’t matter about the money,” Tomlinson told the Mark and Rich Show on XTRA 1360 in San Diego, using generalized words that could be used against anyone who ever holds out, including Tomlinson when he did. “It really doesn’t. Because if you ball out, you’re going to get paid no matter what. That’s the beautiful thing about playing this game and being a player. If you ball out, then you will get paid.”