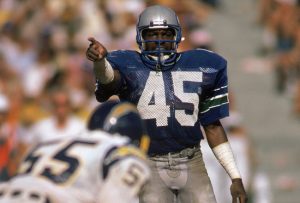 Former Seahawks safety Kenny Easley has been elected as one of the senior finalist for the Pro Football Hall of Fame.

He played college football for the University of California, Los Angeles, and was a three-time consensus All-American. A first-round pick in the 1981 NFL Draft, Easley played professionally for the NFL’s Seattle Seahawks from 1981 to 1987. He is considered one of the greatest Seahawks players of all-time and one of the greatest safeties in NFL history.

In 1984, Easley was named the NFL Defensive Player of the Year by the Associated Press. He was a four-time All–Pro selection and was elected to the Pro Bowl five times in his career. Easley’s career ended after the 1987 season, when he was diagnosed with severe kidney disease.