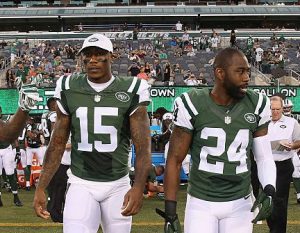 According to Rich Cimini of ESPN.com, Jets WR Brandon Marshall took a swing at Darrelle Revis in practice. Marshall was on the sideline and walked over to Revis, who was on the field. They exchanged words and Marshall threw a punch with his right hand. They were quickly separated. Quincy Enunwa literally picked up Marshall and carried him away. Marshall had been jawing at Revis throughout the practice. Fireworks at Jets camp.

Oh I love the preseason, Tempers are flaring.

This is what happened according to Pro Football Talk:

According to Darryl Slater of NJ.com, Marshall essentially blamed Revis for starting it.

“I beat him two times in a row, and then on the third one, he swung and hit me in the face,” Marshall said, via Slater. “Ever since then, it got really competitive. That came back up in that moment. I just told him, ‘Don’t ever put your hands in my face again like that.’ And he kind of baited me to do it, and I did it. I kind of went too far. There’s a thin line between football and being a man.”

Via Manish Mehta of the New York Daily News, Marshall admitted that he taunted Revis with references to Texans receiver DeAndre Hopkins, who had his way with Revis last season. Manish adds that Marshall claimed Revis brought up “non-football related stuff.”