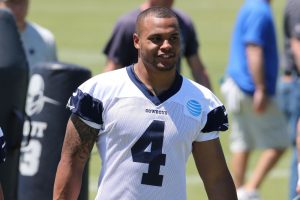 Everyone is currently on the Dak Prescott bandwagon after he had an amazing first preseason game, but after practice his head coach wanted to show him he still had a little something left in the tank.

Garrett made Dak looks silly when he nailed the Cowboys star and it had zip too.

Maybe the Cowboys do have a back-up…..

Jason Garrett’s still got it! ?https://t.co/HNGTsmi1dp