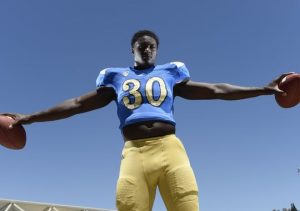 Myles Jack is getting first team reps with the Jaguars

Myles Jack of the Jacksonville Jaguars is getting first team reps in practice.  The kid that was projected as a first rounder who fell because of a medical issue is already making an impact in the league.

“It’s all motivation and I actually appreciate it. It’s made me hungry. It’s grounded me a lot,” Jack told The Rich Eisen Show in May. “It was, honestly, humiliating. It was embarrassing having to sit there, and afterwards walking out, having my girl to my left, my mom to my right, my grandmother to the right of her and having to look at them, it was a tough feeling. It wasn’t a good night, truthfully.”

He played college football for the UCLA Bruins. In his first season, he was named the top freshman college football player in the Pac-12, receiving honors both on defense as well as on offense for his work as a running back. As a sophomore in 2014, he was named an All-Pac-12 linebacker for the second straight season. His season ended prematurely in 2015, when he suffered a season-ending knee injury. Jack was selected by Jacksonville in the second round of the 2016 NFL draft with the 36th overall pick.