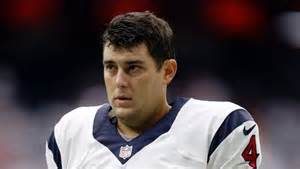 Today the New York Giants signed kicker Randy Bullock. This is a week after they said they support Josh Brown, who is under investigation for domestic violence.  I wonder what this signing means.

Bullock played college football for Texas A&M University, and was recognized as the nation’s best college football kicker and a consensus All-American. He was selected by the Houston Texans in the fifth round of the 2012 NFL Draft, after winning college football’s Lou Groza Award.

It’ll be a one-year deal for Randy Bullock and the Giants. We’ll see what happens with Josh Brown going forward.