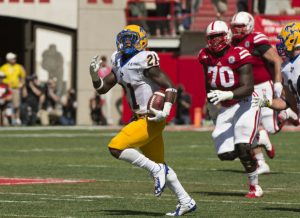 Former McNeese State All American Aaron Sam was shot and killed in Lake Charles, Louisiana.  According to police, they do not believe that the occupants of the home were responsible for his death.

Sam, a LaGrange graduate, played for McNeese from 2011 through 2013. He was a 2013 and 2014 All-Southland Conference safety.“We’re profoundly sorry to learn of the death of Aaron Sam, one of the backbones of our team during his time here,” said McNeese Head Football Coach Lance Guidry, who was Sams’ position coach in 2013 and 2014. “This is a very tragic time for our McNeese family and especially for Aaron’s family.”

He is one of at least three suspects believed to have taken part in the home invasion, Kraus said.

The home invasion was called in around 3:37 a.m., Kraus said. When authorities arrived, the front door was kicked in and Sams was on the floor, dead of a gunshot wound.