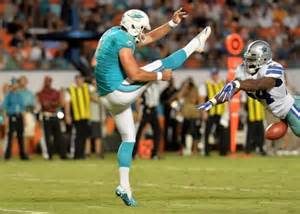 Free-agent punter Brandon Fields is headed to Atlanta for a workout with Falcons after Matt Bosher suffered a chest injury last night vs. Browns, according to Vaughn McClure of ESPN.

Fields punted in two games for the Saints last year, including a 31-21 win over the Falcons in Week 6. He spent eight seasons with the Dolphins and has a career punt average of 46.7 yards. Falcons might sign him depending on Bosher’s status, although Bosher is expected to be OK.

Fields played college football for Michigan State University, and earned consensus All-American honors. He was drafted by the Miami Dolphins in the seventh round in the 2007 NFL Draft. He has also played for the New Orleans Saints.