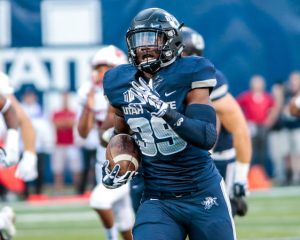 Atlanta Falcons rookie linebacker Torrey Green is at the center of TWO separate rape investigations after two different women told cops he sexually assaulted them while he was a star player at Utah State, according to TMZ Sports.  Here is the details according to Pro Football Talk:

According to the report, the first incident took place on January 14, 2015, when a woman went to police saying that Green removed her pants and began having sex with her against her will at his apartment. The woman reported the incident that night.

The second incident took place on November 21, 2015, when a different woman said Green took her into a room at a party where she had been drinking heavily and locked the door. The woman says she remembers saying “No” and trying to leave, and then remembers Green on top of her with her pants off. That woman also went to police, but police say she later stopped cooperating.

A third woman says Green groped her multiple times against her will. She also went to police.