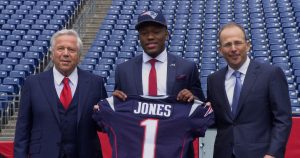 So by now everyone knows the story on why New England didn’t have a first-round pick this year. The Patriots first pick of this year’s NFL Draft was in the second round. With the No. 60 overall pick, New England selected Alabama’s Cyrus Jones.

So who is Cyrus Jones?

He starred as a cornerback, punt returner, and wide receiver for four years at Alabama. He projects to play the slot, and has seen all the early reps as the punt returner and kick returner.

I was able to talk to Cyrus on a 1 on 1 interview today after practice. Here is a breakdown on what he had to say:

Q: How is camp going so far?

A: Camps going well, I’m having a lot of fun. I’m blessed to be in the position I’m in, playing in this league, for the New England Patriots. I’m just working hard everyday and I’m doing my job.

Q: Are any veterans showing you the ropes? You know, taking you under their wing?

A: All the guys help out, give pointers, and offer their advice. I’m definitely listening because I understand they were once rookies. 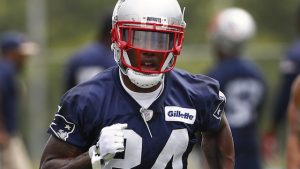 Q: How excited are you for game action? Are you nervous? I know it’s only early August, but preseason games are coming up, and before you know it the regular season will be here.

A: Oh I’m excited! Football is football. I’m working hard and hoping to make big plays for this team.

Q: So you’re number 24, did you choose that number? There’s been some great corners that wore #24.

A: No, the Patriots gave me the number. I’m honored to wear #24 because I know what a great player Ty Law was, and what he means to this town. I also know Darrelle Revis helped this team win a Super Bowl.

Q: I know you went to Alabama, but I noticed on your Twitter account you are from Baltimore. Did any friends and/or family give you a hard time about being drafted by the rival Patriots?

A: Definitely had a few people make comments like that. It was actually a really funny moment. So when I got the call and found out I was being drafted by the New England Patriots, it was kind of a mix of praise and like shock that it was the Patriots. At the end of the day, it’s not like I choose which team drafts me. My friends and family are proud of me though, and understand it’s a blessing, and a blessing to play for a great organization.

Q: Speaking of Alabama, is it an easy transition from Saban to Belichick?

A: I think Saban prepares the players well. It’s obviously still different because this is the pros but Saban was a good coach with the no tolerance mindset that Belichick has.

I should point out that after practice, as I was standing there on the sideline waiting to interview Cyrus Jones, he was putting in extra work. A lot of the guys were already in the locker room, or talking to the media, but Cyrus was catching passes and working on his kick returns.