Did the Eagles make the right hire with Doug Pederson?

One of the biggest question marks going into this upcoming Eagles season is that of head coach Doug Pederson. Many people were left unimpressed when Eagles brass made the hire, but he may already be better than people think. Let’s examine. 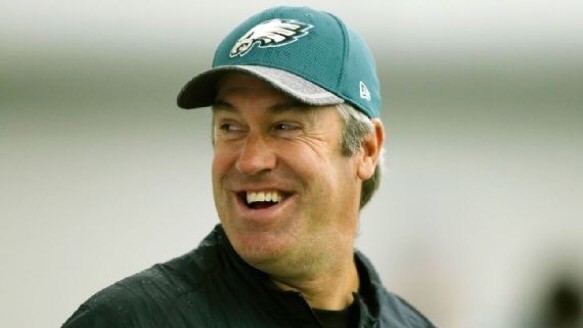 They say the 1st most important job an NFL head coach has is to put together a good staff. Immediately upon being hired this is exactly what Pederson began to do. First he hired former Charger offensive coordinator Frank Reich, who is widely thought of as one of the bright young minds in coaching. Then he hired QB coach John Defilipo, who again is very well respected throughout the league. Defilipo was QB coach in Oakland, and for the Jets (back when Sanchez was a rookie). But Pederson’s biggest hire was that of defensive coordinator Jim Schwartz. Schwartz has head coaching experience, as well as an impressive resume of top 10 and almost top 5 defenses through the years. His influence has already been seen in the play of the defense this early preseason. Without having played a meaningful game yet, it would appear, at least on paper, that Doug Pederson has put together a quality coaching staff.

The second most important thing that gives a head coach a chance to be great is the franchise quarterback. Doug Pederson alongside Howie Roseman decided upon Carson Wentz to be that QB. At this point Wentz has only played in 1 preseason game, but the signs on him are encouraging. Every great head coach has had that QB. Walsh had Montana, Bill Belechick has Brady, Holmgren had Farvre, it goes on and on. If they got the QB right, then this is a big plus on Pederson’s side.

On the field choices can’t be overlooked when looking at the quality of a head coach. Pederson won’t be perfect in this regard, but no coach is. When coach Pederson first said the communication in the QB helmet would go three steps, from him to Reich, then to the QB, he was not aware that it could be direct, once he learned this he decided to go directly from him to the QB. This shows the ability to assess a situation and change course for the better of the team. In the games a few things stood out to me. Throwing Carson Wentz in the 2 minute drills before half in his first ever NFL action was a brilliant way to get his QB going, and I think it worked. Pederson has called a couple different two minute drills so far this preseason, and he’s called them well. A good combination of sideline plays and time outs, they were able to get into scoring position. He hasn’t wasted early timeouts, in fact his clock management has looked better than Andy Reid’s ever did.

I’m not ready to anoint Doug Pederson as the next great head coach just yet, but I do think he might be on the right path.