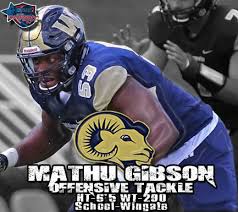 Mike Klis of 9News reports that the Broncos signed rookie G Mathu Gibson to a contract on Friday. Gibson was invited to the Jets mini camp but was not signed.

Gibson was a first-team All-South Atlantic Conference during his rookie season and a four-year starter overall.

We did an interview pre-draft with Gibson, and you can check it out below: