Cowboys like Josh McCown but Browns are reluctant to move him 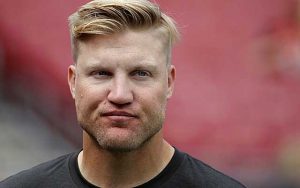 Ed Werder of ESPN reports that the Browns are “reluctant” to trade him, although clearing that hurdle may just be a matter of finding the right price since they seemed to start moving toward Griffin as their choice for starter shortly after Griffin signed with the team. Coach Hue Jackson praised the way McCown has helped Griffin this week, but said, via Cleveland.com, that the mentoring role has “nothing to do with him remaining on the team.”