Blaine Gabbert did not look great last night against the Texans, and while everyone is saying he will likely be the starting quarterback this year, his coach says otherwise. 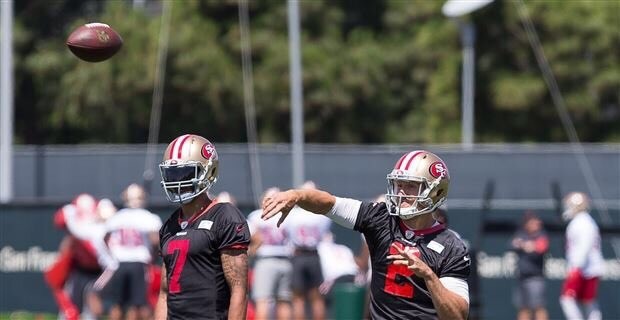 “I don’t look at it as a leg up,” Kelly said, via the San Jose Mercury News. “We’re just going to judge them on the opportunities to get in there and go. So if Colin gets in there and does a great job when he’s in, I’m not going to say, ‘Well, he didn’t get as many snaps as Blaine.’ They’re going to be judged on who moves our offensive football team the best, who protects the football the best, gives us an opportunity to win games.”Judging players on “the opportunities to get in there and go” requires the players to actually get in there and go and it’s hard to believe that Kaepernick’s inability to do that for so long isn’t working against him in a bid for the starting job. Gabbert was 4-of-10 for 63 yards and a touchdown in what Kelly called an “up and down” performance, but he was on the field and it increasingly looks like that could be the trump card in the quarterback battle.

It will be interesting to see what the offense does under Colin Kaepernick.